It may seem bizarre that something as simple as a mirror can be used in the treatment of phantom limb pain, complex regional pain syndrome (CRPS), and stroke rehabilitation, as well as for hand and foot rehabilitation following an injury or surgery.

Mirror therapy is a drug free treatment and has been described in medical literature to be of benefit to 80% of users – some even report numbers as high as 95% and that rehabilitation can be dramatically improved by integrating physical and mental practice. This works by utilizing mirrors to give an illusion that the brain interprets as movement of their involved hand or limb.

The use of visual feedback with the mirror box as a technique for accelerating recover from phantom pain and stroke was originally invented by VS Ramachandran MD at the university of California San Diego. Since then, the procedure has undergone controlled studies and also been employed with success for CRPS and hand injury cases.

It known that all pain often derives from the brain and its perceived threat of a situation. Scanning the brain using a Magnetic Resonance Imaging (MRI) has shown that by using a Mirror Box as often and as long as is comfortable the Neuro network within the brain can start to rewire itself to map its new profile and compensate for the damaged or missing limb, improving the patients’ quality of life.

Improvements come with repeated exercises. This is why a portable, collapsible and lightweight mirror box is an invaluable tool in your recovery, allowing you to do your rehabilitation exercises wherever and whenever you wish.

In order to understand how mirror box therapy works one first needs to understand a little bit about how the body senses the environment around it. You are familiar with the sensation of touch but do you realize how the body creates this experience for you?

The brain has an in built map of the sensory system (a kind “touchy feely” street map) of the body called the somatosensory cortex.

This map of the body is fed information about touch, pressure and pain by sensory nerve fibers which connect to the somatosensory cortex via a system of junction boxes (synapses) that begin at the entry of the sensory nerve in the spinal cord and complete in the integration of the ending of the nerve pathway in the somatosensory in the cortex.

If a model of a man was made in proportion to how much attention was devoted in the somatosensory cortex to each part of the body, the hands, for example, would appear to be 5 times their normal size. 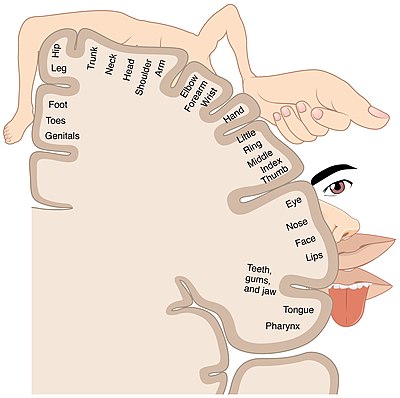 Following an amputation the sensory map of the body becomes smudged and this manifests itself in the experiences of phantom pain and phantom sensation.

Mirror box therapy works by utilizing the visual input of the mirror image of the good limb to replace that of the missing limb to redefine the “smudging” in the somatosensory cortex and thus reduce phantom pain and sensation.

Mirror box therapy has also been shown to help and aid recovery from Complex Regional Pain Syndrome CRPS, also know as Reflex Sympathetic Dystrophy/RSD. In this condition, it is known that the disease process occurs in the somatosensory cortex. When a limb becomes immobile it is thought that there is a disruption in sensory input to the somatosensory cortex which in turn begins to behave as it does in the phantom situation. By performing your rehabilitation exercises within the mirror box using both limbs (one within the box and one in front of the mirror) and seeing a mirror image (instead of the injured extremity ) working normally the somatosensory cortex is encouraged to normalize and the threat to movement is reduced.

Patients recovering from surgery following trauma particularly involving the hand may find moving that hand difficult, part of this difficulty is thought to be due to the immobilization smudging the somatosensory cortex. Recent work has shown that using a mirror box as part of the rehab program can facilitate recovery.

Unhappy With Your Product? We'll Take It Back!

We stand by our high-quality products and your satisfaction is 100% guaranteed.

We use encrypted SSL security to ensure that your credit card information is 100% protected.